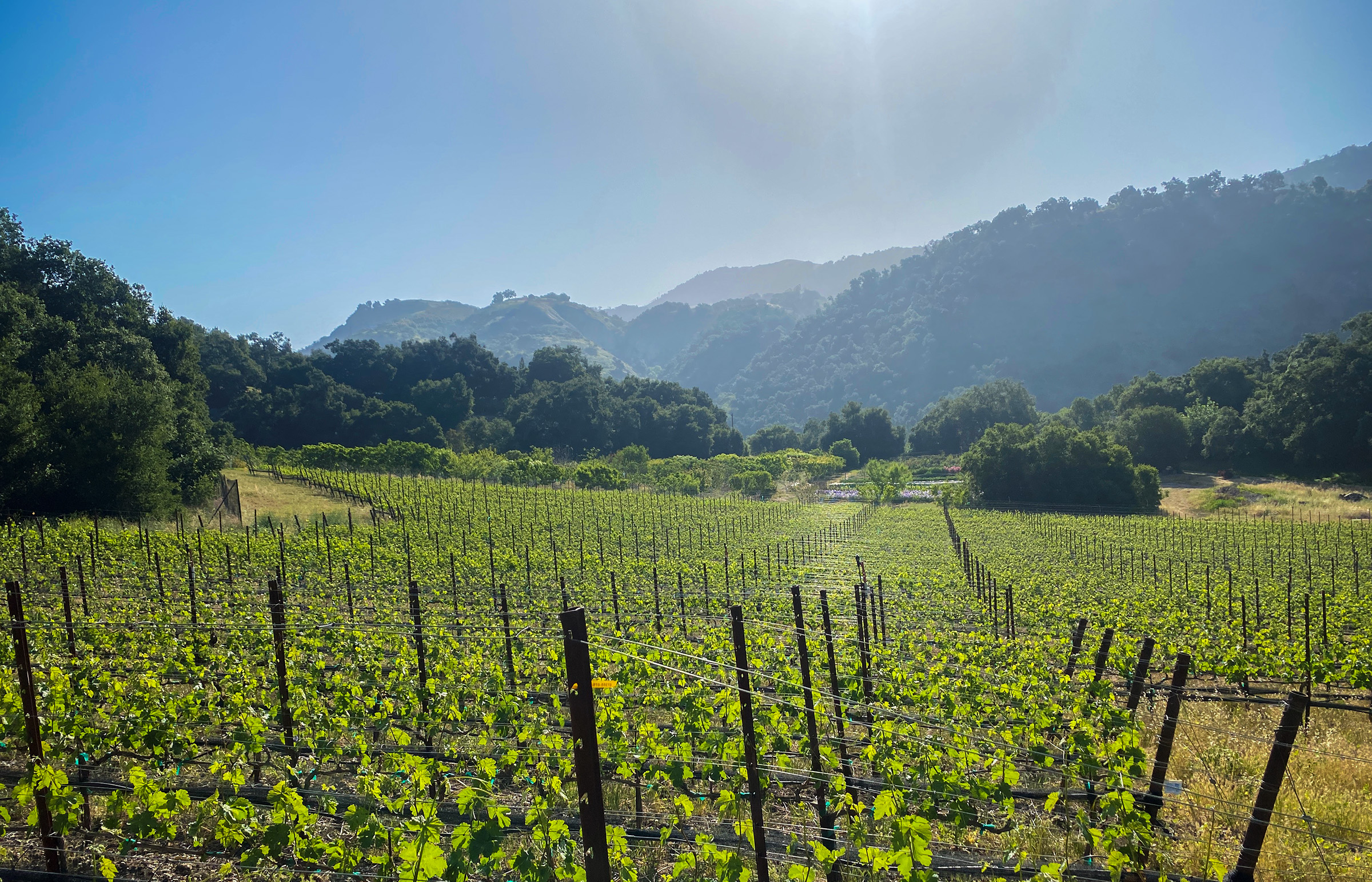 NEW VINES FOR A CHANGING WORLD

In 2017 we seized an exciting opportunity to resurrect our long-gone estate vineyard. This wasn’t just planting any vineyard, though; this was an opportunity to change the future of viticulture in California.

Just down the hill from where we make wine at the Tolmach’s ranch in Oak View, there used to be five acres of Syrah and Sauvignon Blanc that Adam planted in 1981. That vineyard looked beautiful until 1985, when the first signs of Pierce’s Disease began to show. It progressed steadily throughout the vineyard, scorching the leaves and blackening the canes, until all the vines were removed in 1995.

Pierce’s Disease is primarily spread by a flying insect called a sharpshooter, which spreads a bacterium that kills vines within a few years. Back when our vineyard succumbed, we were only dealing with sharpshooters native to California—the blue-green and the green—which are problematic enough. By 1994 (just before our first crop at Roll Ranch), a new and most unwelcome type of sharpshooter from the Southeast was identified and spreading in California—the glassy-winged sharpshooter—and all the ag experts sounded alarms that Pierce’s Disease was about to become a lot more challenging. It did.

For years it didn’t make any sense for us to replant. Now, thanks to new grape varietals bred by Dr. Andy Walker at UC Davis, we have a new vineyard that can be organically farmed and remain bulletproof against PD.

This all came about after Adam travelled up to Northern California to attend presentations about hybrid vine varietals that Dr. Walker had spent years breeding conventionally (non-GMO), with the goal of creating PD-resistant varietals that would lend themselves to making premium-quality wine.

Dr. Walker used a grape from the Southwest called vitis arizonica, which is naturally resistant to PD, and bred this with traditional vitis vinifera varietals. After many generations, the 3% arizonica in the mix still conferred the PD resistance, without showing any of the oddities of flavor/aroma that are often associated with hybrids of French and American vines.

At that time, the tentative releases had names like 07355-075 and the only wines made from them were tiny batches aged in small glass carboys. Still, tasting those at the panel, Adam thought there was real potential to make something delicious with these new grapes.

We were graciously offered cuttings of these vines to trial at the Tolmach’s ranch, and we planted them in August of 2017. There are four varietals—two white and two red—filling out 1.2 acres. That might not sound like much to work with, but the vines are densely planted at 5.5’x5’ and they’re super vigorous, so we have zero complaints about yield (and we thin the yields considerably).

It has been an adventure figuring out how to farm and make wine from these grapes. With no precedent out there, it’s anybody’s guess how to best approach them. After tasting these wines with time in bottle, we’re confident we’ve done well. It took a couple of years to figure out the white grapes, but the red has been delicious from the get-go.

Fun and adventure aside, there’s a real importance to this project. Conditions that favor PD are aligned with our changing climate. With milder winters and fewer frosts, PD moves northward each year and is affecting a broader swath of California’s winegrowing regions. These grapes are a means of perseverance for the future, so being a part of laying the groundwork is exciting.

Check out the info on the new releases below, and scroll further if you’d like to read all the nitty-gritty.

These grapes were bred to make wines that don’t taste unconventional, but they’re kind of a trip on paper. Some have a parentage that is primarily red grapes, yet they end up being a white grape. You see the same vice-versa. The totals below add up to something shy of 100%, and that remaining difference is vitis arizonica and vitis rupestris (aka, St. George, a rootstock vine that can also lend itself to winemaking). Here are the four selections we have planted: 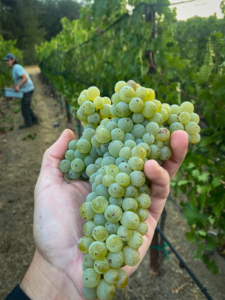 Visually, this grape is the belle in the vineyard. It gives large clusters of seafoam-colored grapes covered in a creamy bloom. The wine is subtle and intriguing, giving lots of fragrances but in a way where you kind of chase after them. We find lots of crushed rock minerality, lemon peel, rosewood and creamy florality. It’s woodsy and slightly herbaceous. It provides a lot of verve on the palate—very energetic, animated by citrusy acidity, with crisp stony flavor and fine tannins from start to finish. We feel we can pick this grape earlier to good effect. It’s like an earthy expression of Vermentino, a bit linear, but lively and refreshing. 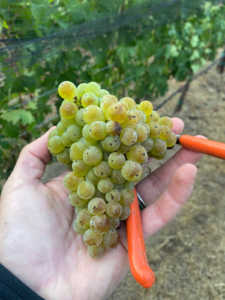 This varietal gives more compact, golden-hued clusters of small grapes—somewhat like Chardonnay in appearance, but definitely more out there with character. This varietal gives overt aromas of kiwi, marjoram, Anaheim peppers, and white pepper. There’s an inherent herbaceousness, so we pick this varietal a bit riper. It’s broad and structured on the palate, giving some juicy melon and apple notes, but it bundles a good load of tannin on the back end. We learned to press it very gently to minimize the phenolics. It’s a bit confounding, with some curiosities that remind you of Gruner Veltliner, and some of the textural power of Roussanne. 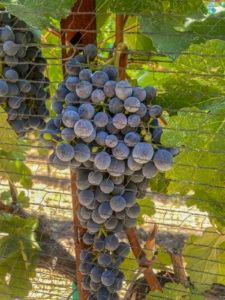 This varietal grows large, loose and winged clusters that we thin significantly for even ripening. It makes for a wine with a highly pleasurable breadth of fragrance and measured power. Everything here speaks to the parentage listed above. You find scents of spicy red berries, dark fruit leather, woodsy notes, and tobacco. The palate is broad and powerful, bursting with muddled berries, licorice, and herbs, then roasty coffee notes dominating the finish. There’s an herbaceousness here too, and one that we’re all about—it sort of takes your mind to Cabernet Franc. It’s plenty structured, but not too much—the berries always taste tannic, so we’ve been careful with extraction. 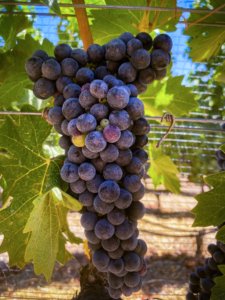 Our second red varietal ultimately did not make the cut for UC Davis folks, so it will not be named like the others. That’s too bad, because we’re quite fond of it! This varietal produces tighter cylindrical clusters. Compared to the breadth of the Paseante, this grape is all about focus. The aromatics are gathered around dark, essential qualities that evoke plum skin and mulberries, with teases of graphite and toasty earth. There’s a more channeled kind of flow across the palate, and a rich tobacco resonance. Without a name all we can call it is “red wine,” so we use it in our Rosé.

Our new planting consists of 1.2 acres of these new varietals. Though it is small, we obtain a lot of fruit because of the tight 5.5’x5’ vine spacing (plus the vigor of these varietals). This vineyard was a total revision of everything Adam had done with the original planting in 1981. Back then he planted the vines untrellised, with wide tractor-friendly spacing. The uneven ripening of those head-trained bush vines always annoyed him. This new planting would be a modern endeavor, designed for the ability to manage the canopy precisely. To ensure even ripening, everything is spur-pruned and thinned to one shoot per spur, then one or two clusters per shoot. Often we thin the clusters themselves, removing the wings and/or bottom of the clusters.

The rows run down a gentle southeast slope, running NW-SE, so the vines are well exposed to the morning sun and somewhat protected from the afternoon sun. The design protects them further, as we have 4 sets of training wires containing a high vertically-positioned canopy. When it’s hottest in the late afternoon, the row orientation and the tall canopy of the neighboring row keeps the grapes well-shaded so that they can gently ripen. The vines are drip-irrigated, but Adam also installed an overhead sprinkler setup that cools the canopy on very hot days (we had zero raisining when it hit 120 degrees in Ojai during veraison in 2020).

Because the rows are so close, that limits what kind of tractor we could use, and doing cultivation by hand would be a nightmare. Adam scored a little Ferrari tractor which has a narrow design that bends in the middle to make tight turns, so it’s perfectly suited for this vineyard. We attach an additional implement called a Clemens, which chews up the topsoil underneath the vines to mechanically kill the weeds (our Chinese weeder geese help a bit too). We don’t have to use any nasty herbicide like Roundup, making for healthier wines and soil.

It’s strictly organic farming here—no insecticides, herbicides, only fertilized with compost and other organic nutrients. Just the way we like it. 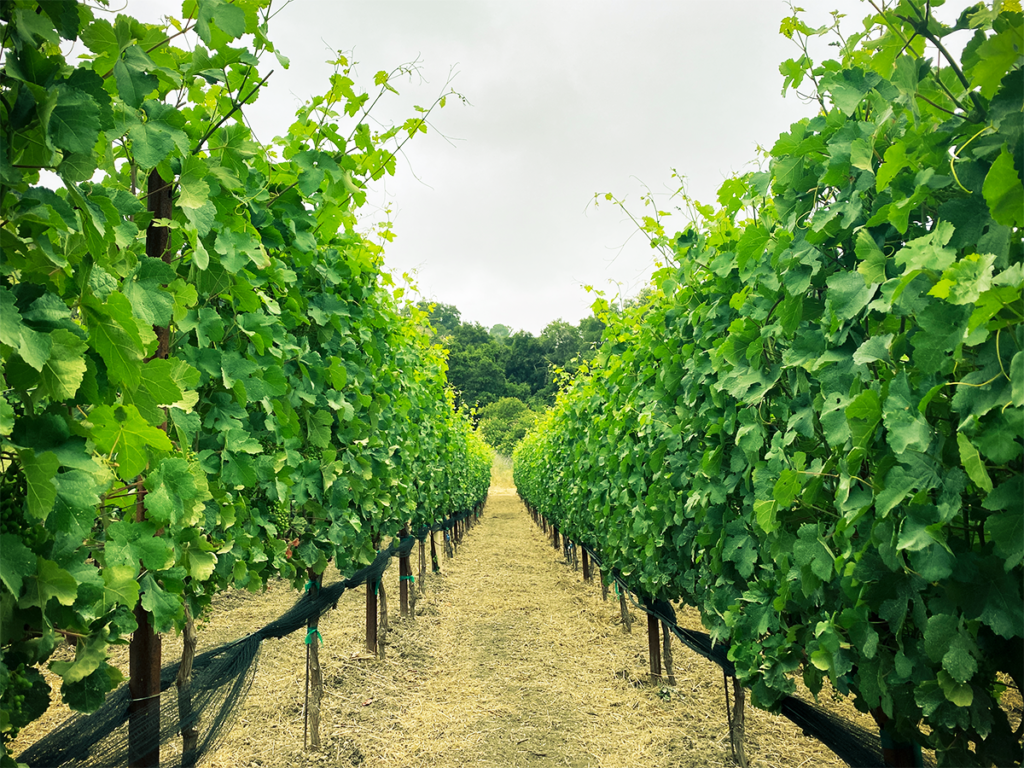 The home ranch vineyard, verdant in the June gloom.

Even in the earliest days of California winegrowing Pierce’s Disease was a problem. It was first reported in 1882, when it began ravaging vineyards in the Santa Ana River Valley near Anaheim. The USDA commissioned a plant pathologist named Newton B. Pierce to study the problem, then he identified it as a bacterial disease in his 1891 report. In that decade forty-thousand acres of grapevines near Anaheim were lost to PD, resulting in the closure of fifty wineries.

Vineyards are infected by the feeding activities of sharpshooters, which have a straw-like mouth that they use to suck juices from the vines. While doing so they infect the vines with a bacteria called Xylella fastidiosa that clogs the water transporting tissues, generally killing vines within a few years.

But back then we only had the native types, the blue-green and the green sharpshooters. These bugs prefer riparian habitats (or lush green pastures), and they can’t fly much more than a few hundred feet, so vineyards adjacent to creek beds (like the Santa Ana River, or the Napa River) were the main areas that contended with PD. 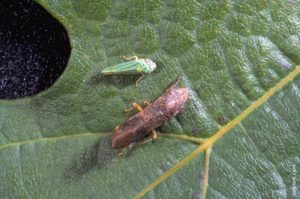 Things got worse here down South in the 1990s, when a new type of sharpshooter arrived from the Southeast—the glassy-winged sharpshooter. It was identified in California in 1994. Compared to the native types, the GWSS is much larger, more robust, and able to fly a lot further. Instead of being limited to areas within a few hundred feet of creek beds, the GWSS can cover distance. It feeds more voraciously to fuel its travels, so theoretically it’s a much more powerful vector for PD than the native sharpshooters.

Because the GWSS is native to the Southeast, it has shown a preference for the milder winters of Southern California (see the map below). It also loves to overwinter in citrus groves, which are abundant in SoCal—particularly in Ventura County. People plant grapes anyway, leaning on chemical pesticides called neonicotinoids to stave off the malady (which is never 100% successful). The relative isolation of our Upper Ojai vineyards helps a bit with prevention, though we still lose vines and are continually replanting to keep those vineyards going. 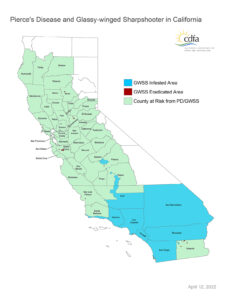 Northern California isn’t entirely free of GWSS, as you can see from the map. People have beaten back small populations right at the doorsteps of Napa, Sonoma, and the Santa Cruz Mountains. And it’s not just sharpshooters that are the problem—spittlebugs also spread PD, and they’re becoming problematic in the Sta. Rita Hills and other regions.

With our changing climate—skewing toward more years with mild, frost-free winters—there are more robust populations of these insects coming out of winter. The writing is on the wall for PD to take root across a broader northward swath of California. These grapes could very well be an important tool to help mitigate future viticultural challenges in California, and it makes sense to trial them in areas that already have high PD pressure. Now, for posterity’s sake, we need to get consumers tasting and embracing delicious wine made from these varietals. We’re excited to spearhead the effort!