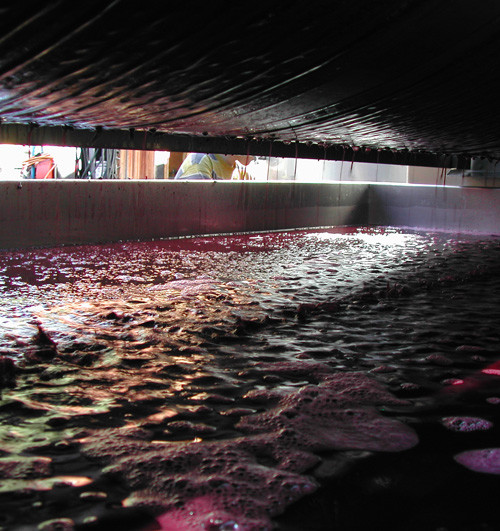 Years ago, when the Perrin brothers of Chateau Beaucastel were looking for a property in California to plant southern Rhone grape varieties, François told me that California’s climate is ideal because – unlike in Chateauneuf du Pape – it almost never rains in August or September. I had always assumed that France’s famed terroirs were ideally suited to each region’s specialities, and had no idea that the country’s winemakers face weather and climatic challenges that profoundly affect their decisions at harvest and the quality of their wines. I began to appreciate the unique benefits of California, although I hadn’t yet realised that southern California’s “ideal” climate is also a double-edged sword.

The most interesting grapes from Santa Barbara are in the westerly reaches of the east-west valleys of northern Santa Barbara County. When you think of Santa Barbara, you probably see sandy beaches, but those east-west valleys 60km north of the city are something entirely different. With the prevailing Pacific Ocean breezes unhampered by hills or mountains, the valleys generally remain in the 70s and low 80s (around 20°C) during the growing season. In this zone, summer or fall daytime temperatures above 90°F (32°C) are rare. When they get that high, it’s usually only for a few hours. Heat destroys character in grapes, so under these moderate conditions the fruit has lots of personality and high levels of acidity. The cliché about it never raining in southern California is true, but the challenge is deciding when to pick the grapes. Physiological ripeness isn’t something that can be measured (“Brown seeds, pick it!”), but a matter of preference. As Chardonnay ripens, it goes through a progression of flavours. If picked very under-ripe, these are woolly and vegetal; a little riper and they become lemony and herb-tinged – riper still, and they are effusively tropical fruity, and later, soft, caramel and banana-like. Who is to say which flavour profile of ripeness is the right one?

When I began making wine in the late 1970s, vines were grown haphazardly in what is called the “California sprawl”, irrigated by overhead sprinklers that soaked the soil thoroughly, making it almost impossible to control vine growth. I vividly remember 1982, when Jim Clendenen and I started the Au Bon Climat winery, harvesting the grapes ourselves to avoid picking costs. The Pinot Noir fruit harvested on that steep hillside varied in ripeness from almost green to raisins. We vigorously discussed the merits and disadvantages that greener fruit brought to a wine’s flavour but nonetheless felt compelled to pick it all. Although far from perfect, the wine we made was surprisingly interesting. In those early days we hired crazy Australian winemaker Frank Kittler as our cellar helper, and he contributed greatly to those viticultural discussions. Thanks to him, I realised that California was at least 10 years behind Australia in understanding vineyard management and its effects on a grape’s physiological development. Grapes’ flavour is determined by how the vine grows. If, at harvest time, the vine is vigorously producing shoots and leaves, the fruit will taste leafy and green. The goal is to make the vine stop growing as harvest approaches to concentrate all its energies on ripening the fruit.

Nearly 20 years have gone by, and everything has changed. Thanks to drip irrigation and vertical trellising of vines, the fruit we pick today is fundamentally different. Even if many find irrigation abhorrent, it has become a fabulous tool in California’s very dry climate for achieving physiological development at lower sugar levels, and this is important for the production of better-balanced wines. Careful growers can micro-manage how their vines grow. Water-stressing vines post-flowering and pre-veraison (berry softening) produces fruit that is smaller and more concentrated in flavour, and judicious irrigation in late summer prevents premature leaf drop which allows the vine to fully ripen its fruit. Vertical trellising has helped achieve even ripening. Training the vine’s shoots into a narrow canopy that allows all the fruit to receive the same amount of sun exposure, manicuring that canopy, choosing where to direct the vine’s vigour, and thinning out fruit that is less ripe are among the various procedures that have led to more evenly ripened fruit. Taking the farming a step further, I have worked closely with Chris Hammell of Bien Nacido Vineyard to manipulate our vines so that the fruit is physiologically ripe at lower sugar levels. The method is complicated, with more variables than can be easily controlled, but our efforts have been rewarded with some notable successes.

At the winery, the focus has always been on craft, keeping the production small, and letting our personal experience, knowledge and intuition guide us – a restless quest for the best that has seen the winemaking evolve over the years. Our first reaction to the vegetal aromas and flavours that marked my early efforts was to pick riper fruit, which removed the oddness that uneven ripening and poor farming can imbue. I then negotiated long-term contracts with growers to buy all of my fruit from the same spots every year and paid for it by the acre, rather than the ton, which enabled me to control yield and farming practices. The fruit harvested from these carefully farmed plots has intense flavour, but the small crop ripened more quickly and we often picked very ripe grapes. While the resulting wines were impressive and have aged well, some were a little too thick and stolid for my tastes.

Unlike the wines I was making, at home I tended to drink wines that were more transparent. Even if they were huge, they were always alive and refreshing. I wondered whether our southern California fruit was inherently clunky, and turned to trials in harvesting grapes at lower sugar levels so as to see whether, with improved farming techniques now in place, we could make better wines. This happened when perhaps all but five winemakers in the Santa Barbara area were choosing to wait three to six weeks after what I considered was super-ripeness before harvesting their grapes. I was (and still am) consistently one of the first to harvest in any particular vineyard, and it was somewhat unnerving to have other winemakers ask me if it was sensible to harvest grapes before the seeds had fully matured or some other physiological criteria. These discussions of what constituted physiological ripeness often seemed like excuses to justify the big wines that are so popular in this country.

Let me make one thing clear – I am not interested in making or drinking insipid wines, and I am a great fan of what a little more ripeness has brought the wines of Bordeaux in the last 20 years. This brings up an issue that has nothing to do with physiological ripeness – the question of taste. What is the ultimate wine? Is it 1947 Cheval Blanc, the celebrated overripe, prune-y, decidedly sweet claret? Or is it, as Josh Raynolds suggests, a wine that is so delicate and nuanced, one that so transparently evokes the place where it is grown, that you might miss the point of it if you weren’t paying attention?

I realised that people have very different expectations of what a wine should taste like after I visited a tiny restaurant in Alba, Piemonte back in 1981. The owners had a winery down in the cellar, and they served their wine as the house red in the restaurant. I knew little of Italian wines but found theirs to be deliciously full and rich. In my enthusiasm, I described their wine as fruity, which the winemaker took as an insult. To him, fruity wines meant simple and banal.

Nineteen years later, Cristiano Garella of Tenuta Sella, a young man with great tasting confidence, saw things in a similar light. We tasted through my wines in the cellar, and it was fascinating to see how he reacted to the various styles. He was not in the least impressed by fat or fruit, but was interested in underlying terroir and minerality. I had him taste a viognier I particularly like from a nearby vineyard. Others had found the wine a bit disturbing because it is not in the typical, fruity, soft, low-acid style of California viogniers, but Cristiano loved its minerality. It was a pleasure to taste with someone who focussed on a wine’s essence rather than on the superficial attributes of ripeness. I began to understand that, beyond individual preferences, taste is also cultural. We Americans love sweet; others prefer savoury.

We lost many opportunities to experiment with ripeness in 2002-2004 because of weather and crop conditions, but in 2005 we tested a Pinot Noir at Clos Pepe, in the very cool Santa Rita Hills of Santa Barbara County. It was a particularly early harvest, and on the first day of September we picked the first half of the vineyard at slightly under 24° Brix – a sugar level that in Burgundy and elsewhere would be considered fully ripe, perhaps overripe. It produced a wine of 14% alcohol. The weather was so mild that we waited until September 17 to pick the other half at about 26° Brix (a level of ripeness higher than I wanted, even many considered this second picking was an early pick – at that point, very little had been harvested from Clos Pepe). The two wines were fascinating to watch as they matured in the barrel. The riper wine had a much fatter, richer feel and an emphatically fruity aroma and flavour. It was a crowd pleaser, but the wine-geek staff here said it lacked punch.

The less ripe batch had a completely different profile. It captured a floral aromatic quality that recalled rose petals – it was stunning. The flavours were crisper, finer and more overtly tannic. We decided to blend the two lots for our general release but bottled a single barrel of the less ripe wine to see how it developed. I have served the two wines together many times, and the reaction has been interesting. I find that subtlety is lost on most folks, but I have had a few gratifying experiences, the most memorable with my distributor in Chicago. I presented the wines in a crowded boardroom to his sales staff of committed wine geeks, and every one of the 16 present preferred the less ripe version because they felt that this is how Pinot Noir should taste. For these food-obsessed tasters, sweet richness isn’t considered a virtue, but floral, savoury zippiness is.

Since 2005, we have pushed hard to harvest at more moderate sugar levels and we continue to be enthusiastic about the results. In this climate, there is an ideal period of two or three days when a vineyard is at its optimal ripeness; after that the wines gain more volume and heaviness but lose clarity and finesse. The challenges have been twofold: growing the vines so that the fruit is physiologically ripe at lower sugar levels, and picking that fruit at the ideal moment of sugar ripeness.

Because our mild climate can suddenly turn hot and/or dry at a moment’s notice, we have seen fruit move within days from a potential alcohol level of 13.5% to one of 16.5%. This scenario has driven me to work with the coolest, most westerly vineyard sites because they remain more temperate in severe conditions. As elsewhere, the most interesting wines come from vines at their climatic extreme, like the wind-beaten vines at the western edge of northern Santa Barbara County. We continue to refine our understanding of what is the ideal moment to harvest, because here, unlike in more extreme latitudes, that impending winter storm won’t make the decision for us.