Getting into the 2018 Chardonnays 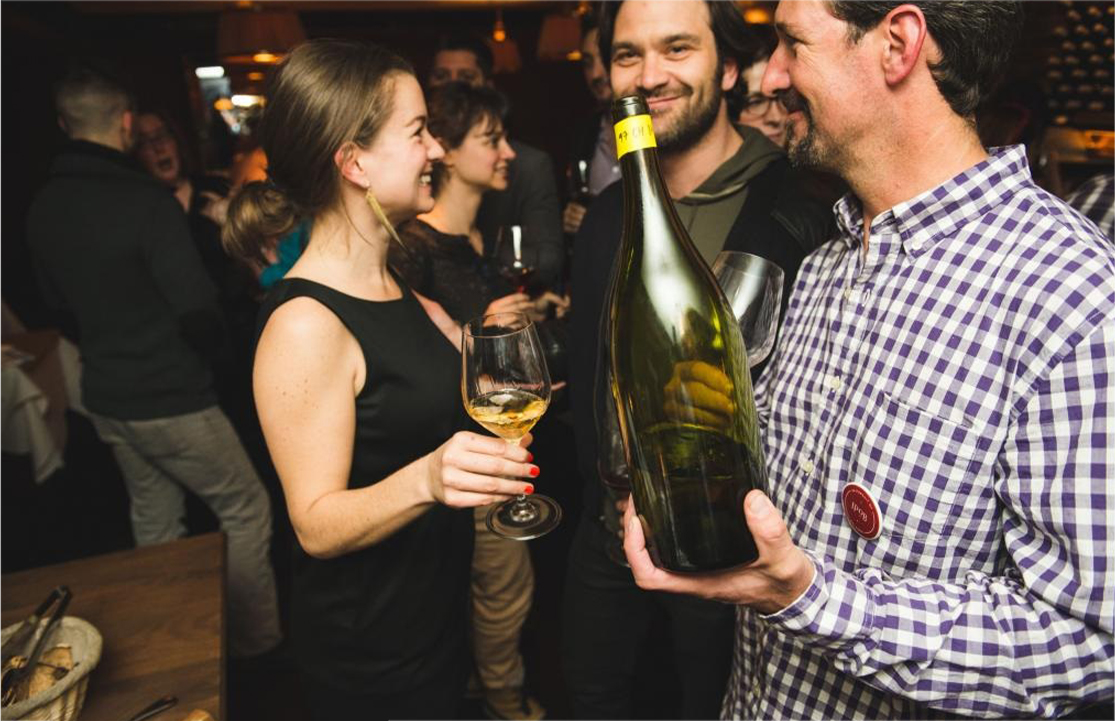 Alright, folks—we have officially released our 2018 Chardonnays, and praised be the 2018 vintage! We’re just beginning to talk about 2018, and you can expect more talk going forward with releases to come.

This vintage was an outstanding one for us in the Central Coast. After a string of drought years with warm winters and early bud break, 2018 was like a welcome flashback to our climate a decade ago.

A truly cold, wet winter segued into much of the same in Spring. Bud break came on the later side of what was normal in the 2000s, then cool and cloudy weather dominated the growing season. We enjoyed a long, staggered harvest with each lot showing excellent development at moderate sugar levels.

We harvested our Chardonnay from Bien Nacido and Solomon Hills on September 20th, then Puerta Del Mar a week later on September 27th. That’s a clean month later than 2014 and 2015, when we had two-thirds of our harvest completed by the end of August.

You may have enjoyed some teasers of 2018 so far with the Rosé, maybe the aromatic whites. Now that we’re getting into the Chardonnays we can start to see a more vivid picture of the vintage.

Chardonnay is harvested around the same time as Pinot Noir (sometimes a bit later), so with its release we get a window into the events that shaped the Pinot Noirs and Syrahs that we bottled just recently. Chardonnay provides an innate transparency to those events, too.

When you taste these three Chardonnays as a set, these wines could not be more distinct from one another. Vintages this cool exalt vineyard character commensurately.

What tethers the set together is each Chardonnay’s profound depth of minerality, effusive fragrance and great tension that carries densely packed flavors.

My wife and I hosted a little kitchen collaboration with another couple and cooked up a few courses to play around with these wines. Let’s talk the nitty-gritty details on how these are showing right now… 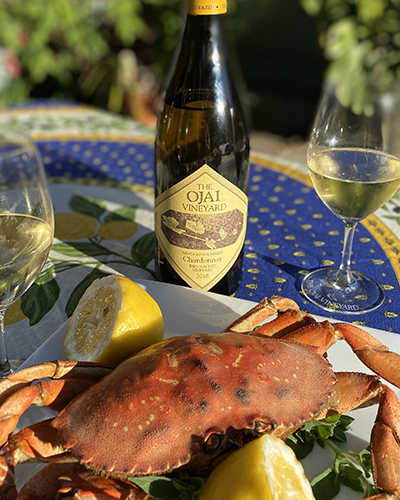 In terms of general openness and good-to-go drinkability, there’s definitely a range between these three wines. I tasted these Chardonnays with Adam and Dieter back in January; tasting them again three months later was super interesting.

Solomon Hills is for sure the most outward and ready of these 2018 Chardonnays. It seemed that way in January and still does now. That makes sense, as this Chardonnay was the first to be bottled (in June 2019 rather than August for the others). Generally our Chardonnays are aged eleven months in barrel, until the next harvest is approaching, but sometimes they’re bottled in late Spring if they’re ready.

The Solomon Hills Chardonnay is all about broad curves, lots of radiance with decadent elements in the mix. We’ll get to more of that…Suffice to say this wine is gorgeous, creamy and giving now, but there’s density here to age well upwards of a decade (as Solomon Hills does).

Bien Nacido is in the middle of the pack in terms of readiness. This Chardonnay has a way to go, but I would not call it tight anymore. It’s just very predicated on stoniness, lots of rocky gravitas. The fruit is emerging though, and it flourishes in the glass. The tightrope balance between earthy reserve and evocative Bien Nacido complexity is stunning in this 2018.

If you like your Chardonnay to have more of tense and energetic feel, this one is a thrill now. Seeing how it has evolved since January, let’s expect this wine to manifest more of its creamy elegance throughout 2020. This is a classic Bien Nacido Chardonnay that will be piercing and fresh for years though.

Puerta Del Mar is definitely the least evolved of these Chardonnays. It has come a long way since January, when it was raw and mean. Now it’s beginning to open up, but it’s firmly rooted in earthiness and speaks to focus, compression and drive. Hints of creaminess come (especially as you’re finishing the bottle) but it’s citrusy thrust and ratcheting tension that defines this wine’s texture.

You could say this Chardonnay wants the most time of the three, you wouldn’t be wrong. You could also say it’s especially focused, fat free and delicious now. Being a big fan of Sauvignon Blanc and Riesling, I personally love this wine when it’s edgy. No doubt though, there’s an absolutely elegant, creamy and airy future for this wine, probably a year or two down the road.

Again, these three 2018 Chardonnays vividly show a spectrum, with aromas and flavors that render a broad span of what Chardonnay can manifest.

The Solomon Hills is definitely the richest amongst this set of Chardonnays. At first there’s the fresh seafoam, lemon and pine-y fragrances we know and love from this vineyard, then air brings out more decadent aromas: poached pear, dried apple, sweet chamomile and toasty brioche.

Much of that carries over to the palate, which also shows fleshy white stone fruits, marzipan pastry, and spicy nutmeg flavors. This Chardonnay really nods to the full and elegant Grand Cru Chardonnays of Beaune, where Chardonnay shows its most fine balance of thrust and lavish flavor.

The Bien Nacido shows more containment. Right off the bat, this bottling immediately comes across as serious stuff (that is, compared to the flirtier ’17). The aromas are earthy and layered: intensely stony underpinnings, rich lemon curd and toasty lees in the middle, then zesty meyer lemon, white peach and apple blossoms in the high tones.

On the palate it’s like a distillation of Bien Nacido Chardonnay and all of its potential granularities. Dominant notes of lemon cream and nectarine are sculpted by lively minerality, then that segues into ginger, iodine, and that curious not-quite-honey vineyard note of bee pollen. It shows more earthy reserve compared to its sister vineyard, Solomon Hills, and more tension, but it opens up beautifully.

The Puerta Del Mar takes the cake for mineral redolence. So, classic Puerta Del Mar in a sense, but this 2018 bottling takes it to another level with its striking scents of sea spray, shells, and chalk. That comes with other scents of white flowers, tea and salted lemon rind. Sometimes people relate to earthiness as a kind of austerity, here you find it’s evocative.

It drinks with a crisp, citrusy drive of flavor that the aromatics allude to, while fleeting creaminess brings hints of pear and stone fruit. You find other flourishes of lemongrass, cinnamon, and subtle notes of herbs and tea. Some of us at the Tasting Room call Puerta Chardonnay “the Ballerina,” yet despite the lithe character this 2018 seems too densely packed for that nickname. 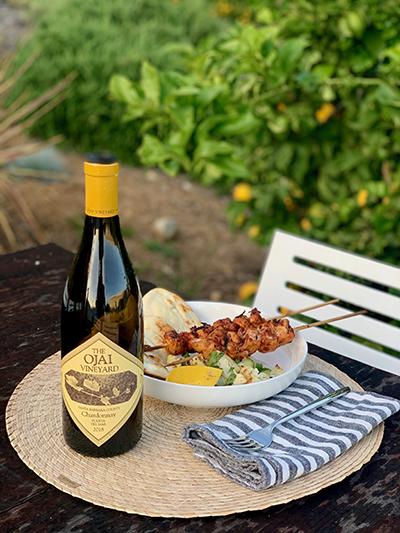 If you know our Chardonnays, you know they are always built for a good meal. The cool weather of 2018 ensured that these wines will shine at the table much as ever. Here are some observations and suggestions for relating these with foods:

The Solomon Hills Chardonnay gels well with food-free drinking thanks to its curvy richness, but it’s outstanding alongside a good meal. The creamy textures and concentration of this wine will work complements hearty flavors.

This wine was our favorite alongside Dungeness crab and melted garlic butter. Rich shellfish is great with this wine, save maybe some for next year’s Spiny Lobster season!? Other ideas:

The Bien Nacido Chardonnay shows more spine with acidity, so that opens up a broader range of pairings. Frankly, it’d be great with everything aforementioned with Solomon Hills, but the citrusy bent here welcomes play with brighter pairings.

This wine was our favorite alongside tangy buttermilk-brined fried chicken, which our friend topped with gremolata—chopped lemon zest, garlic and parsley (which we decided should be SOP). Other ideas:

The Puerta Del Mar Chardonnay is probably the most rewarding of a thoughtful matchup. It has terrific acidity, crisp minerality and great focus, so this wine totally dovetails with seafood. It also vibes well with briny flavors (like capers or cured meat) and dishes that highlight farm-fresh produce.

We loved this wine alongside a simple Provençale mussels dish we made. The stark vineyard character of this wine works well with uncluttered preparations driven by great ingredients. Ideas:

*For a limited time we’re selling these three wines as a trio with a limited-time price of $89—send a trio to any Chardonnay loving mama for Mother’s Day, or scoop up a trio or three to ship to yourself… 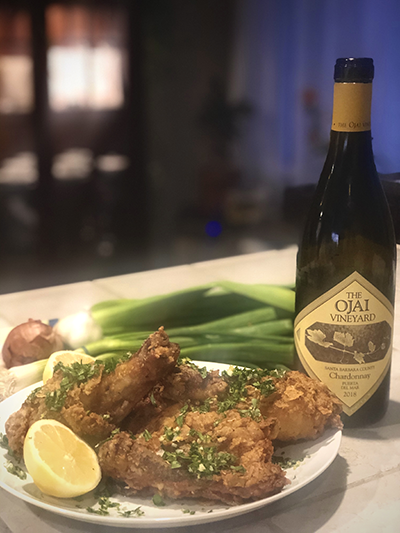