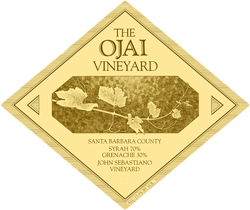 What an amazing aroma this wine possesses! It’s full of peppery spice and crushed raspberries and it’s alive and exciting. The flavors are as compelling, showing off a concentrated fruitiness balanced by peppery tartness and the most beguiling silky texture.

The experiment we began in 2011 continues with this offering of 2014 Syrah 50% Grenache 50% from the new John Sebastiano Vineyard located on the eastern edge of the cool Santa Rita Hills appellation of Santa Barbara County. Please see my notes (Click Here), but in a nutshell here is the deal:

We use sulfites in our wines sparingly. It’s traditionally added to avoid having wine turn into vinegar and in small quantities sulfites seem to preserve perfume and freshness, while larger amounts make wines more brittle, hard and rubbery. We were intrigued by a delicious sulfite free wine that a former employee (Sashi Moorman) made, and thought it would be a fun challenge to try making one ourselves. Our first effort was in 2011 when we made a lively syrah with a particularly easygoing texture—which we attributed to the lack of added sulfites. So in 2012, 2013 and 2014 we tried again with a syrah/grenache blend and liked the results every bit as much. Check it out, you won’t be disappointed!

“The 2014 Syrah-Grenache John Sebastiano Vineyard (No SO2) is another total knock-out. A rush of dark red and purplish fruit, tobacco, menthol, licorice and sage hit the palate first. Vertical and deep on the palate, the 2014 is going to need at least a few years to unwind. Given the no SO2 approach, it’s hard to say how the Syrah-Grenache might age beyond the near and medium term, but it is super-impressive today. The wine’s density and overall complexity are incredibly alluring, even at this early stage. ”- AG 95 Points